Matthew Dagg (Yr 9) hasn’t been letting the grass grow underneath his feet over the long summer holidays and as a result is celebrating winning The Northern Summer Tennis Camp Singles Competition. Matthew is a frequent player at Urmston Lawn Tennis Club where he has played since he was a mere five years old, urged on by his father Stuart 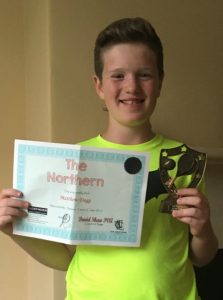 who is also a club member. Matthew currently plays in The Northern’s Gold Squad and at this year’s summer camp, he proudly battled and won against a 15 year old in the Final.  Matthew is fast becoming a very strong and accomplished player within the squad achieving significant wins against much older teenagers and recently out-played a 36 year old in a local club competition! Urmston Lawn Tennis Club has recently completed a £90,000 facilities redevelopment programme and holds regular free coaching sessions with their LTA coaches to encourage more children and adults to try out this popular sport.