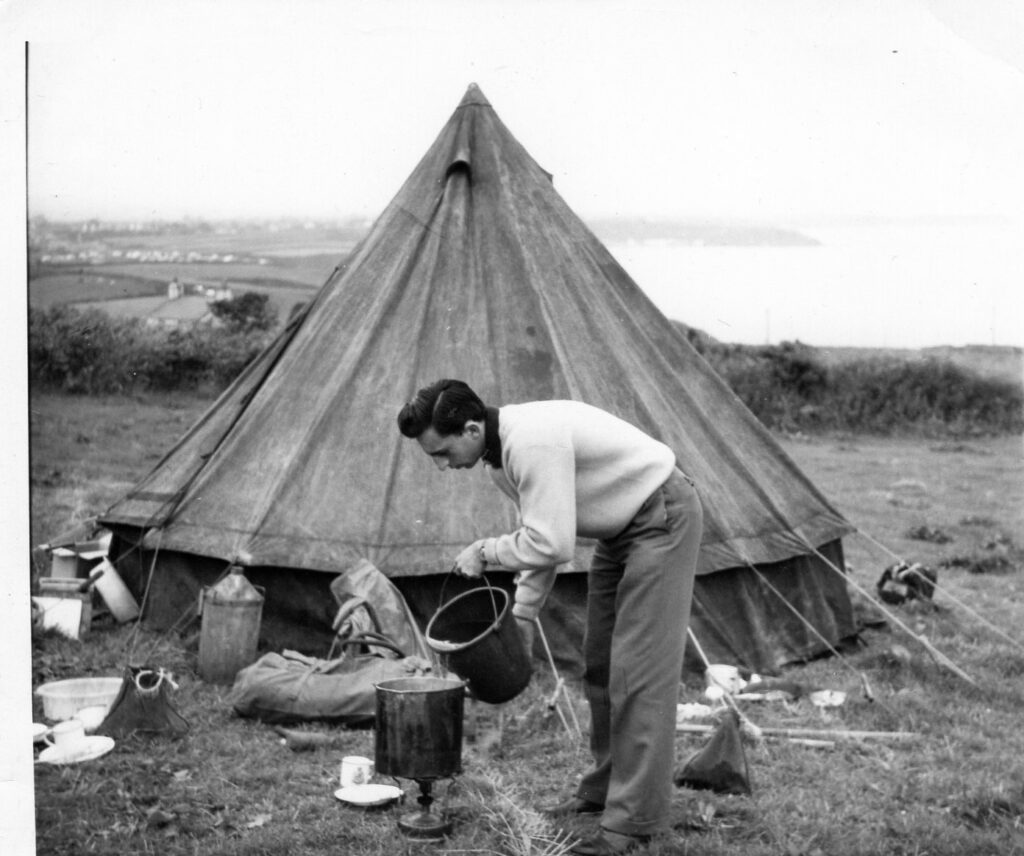 A ghost, a ‘dip’ in the pond and a merry dance…

As one of the 50 pioneering, founding Bridgewater Old Boys, and probably the oldest alumni, the school’s 70th anniversary seems like an appropriate time to take a nostalgic ramble back through some of the more colourful and memorable events of the school’s early history.

They are stories that hark back to the days when pupils needed four old pennies to make a telephone call from a box, when heavy leather footballs had to be laced up like walking boots and when a large valve-operated radio in the headmaster’s study was the only means of tuning in to the outside world.

How many of today’s pupils or staff, for example, know the story of the school’s ghost or the bizarre ceremonies involving the old school pond? Who would now know anything about the compulsory dancing lessons for seniors or the ‘fiddler’ on the roof who hoped to win the prize to measure the height of Drywood Hall using trigonometry?

When the Founding Fifty arrived in 1952 – having been in temporary accommodation in Abbey House Club, Eccles – the old black and white hall was the only building on site except for some sundry brick outhouses (that were converted into the school’s first science lab), a pigsty – complete with school pig – and a quirky wooden summer house at the bottom of the front garden where pupils often consumed their sandwich lunches.

But first the story of the school ghost. Our headmaster in the 50s, who lived on the premises with his wife and children, would relate ad nauseum how he would see the apparition of a little girl in white dress with blue sash sitting half-way up the main staircase and how his pet bull terrier would cower and yelp and refuse to go up the stairs.

At other times, he would come down in the middle of the night and see the piano keys moving in the main hall and the curtains flapping against open windows that he maintained he had tightly closed before retiring to bed. He was convinced that Bridgewater was haunted by a little girl, the daughter of one of Drywood’s previous owners, who had died after falling into a well in the front garden alongside a large horse chestnut tree.

We used to collect conkers from the tree and have conkers fights during my years at the school but by that time the well had been filled in and there were no signs that it had ever been. In my day, Bridgewater was for boys only but now that it is co-educational, I like to think that the little girl in the white dress feels more content and has no desire to float about in the wee small hours.

The frog-populated school pond, which was just to the right inside the main gates and had a stone statue in the centre, had an unpleasantly slimy reputation among those senior pupils who on reaching 18-years-old had learned to drive and were taking their driving tests. If they failed, they were tossed into the pond fully clothed winter or summer by their classmates. It wasn’t deep or dangerous, but I was still greatly relieved when I passed my test. Others were not so lucky.

Trigonometry was a mathematical mystery for most – so when the headmaster offered a prize for any boy who could measure the height of Drywood Hall from the apex over the main door to the ground, using trigonometry calculations, it was a challenge that one pupil (who I will not name) could not resist. But his measuring technique was unorthodox to say the least. He returned to the school in the dead of night, climbed on the roof and lowered a weighted string from the apex to the ground. His ‘fiddler’ on the roof ruse was detected and he did not win. I don’t know if anyone ever did.

Brazil, Germany, Spain, Italy and England are today among the great footballing nations but during my years at Bridgewater in the 1950s, it was the Hungarians, the ‘Magical Magyars’ as they were known, that dominated world football. So, when a crack Hungarian schoolboy eleven came on tour to the UK, the headmaster took advantage of the opportunity and challenged them to a match. It turned into a rout with the final score Hungarians 14 – Bridgewater School 0. And I was in goal!

But that was of little consequence compared with the real sadness and grief that spread through the school when news came through of the Manchester United Munich air disaster on February 6, 1958 in which so many of the legendary Busby Babes lost their lives. The entire school, pupils and staff, listened to the unfolding news on the headmaster’s radio and all lessons were stopped for the day.

A ‘disaster’ of an entirely different nature arose when the headmaster received an invitation for senior pupils to attend a dance at the former Worsley High School for Girls (sadly destroyed in a fire in the 1960s). Our headmaster was horrified to learn that none of the boys could dance so arrangements were made for us to have compulsory dancing lessons at a studio in Monton.

For several weeks we were put through our paces in the waltz, quickstep, foxtrot, military two-step and the valeta at evening classes but on the day of the dance our hours of tuition proved to be of no use whatsoever. Our hosts simply wanted to perform a candlelit Cuban-style conga line through the school cellars. The lessons were a complete waste of time, but it was much more fun than we had expected.

Bridgewater School can also claim to be the ‘birthplace’ of the tubular bandage. One of my fellow pupils, Norman Stoller, invented the tubigrip bandage and, with other family members, went on to build the giant Seton Healthcare Group in Oldham. He earned a reputation as a great philanthropist and was knighted in 2016, when he was 82 years old.

But for me, my personal hero at Bridgewater was my English teacher, the late Norman Pakes. During my French O-level examination, in what was the old school library, I told the examiner in French that I wanted to become a journalist – even though my father, who was a GP and for a time the school doctor, wanted me to follow in his footsteps. Mr. Pakes realised I was serious and informed my father of my wishes at a school open day and, with his encouragement, I went on to enjoy a long newspaper career travelling the world on various assignments.

I am now retired but still work from home on various literary projects. I owe my career to Bridgewater School and especially to Norman Pakes.