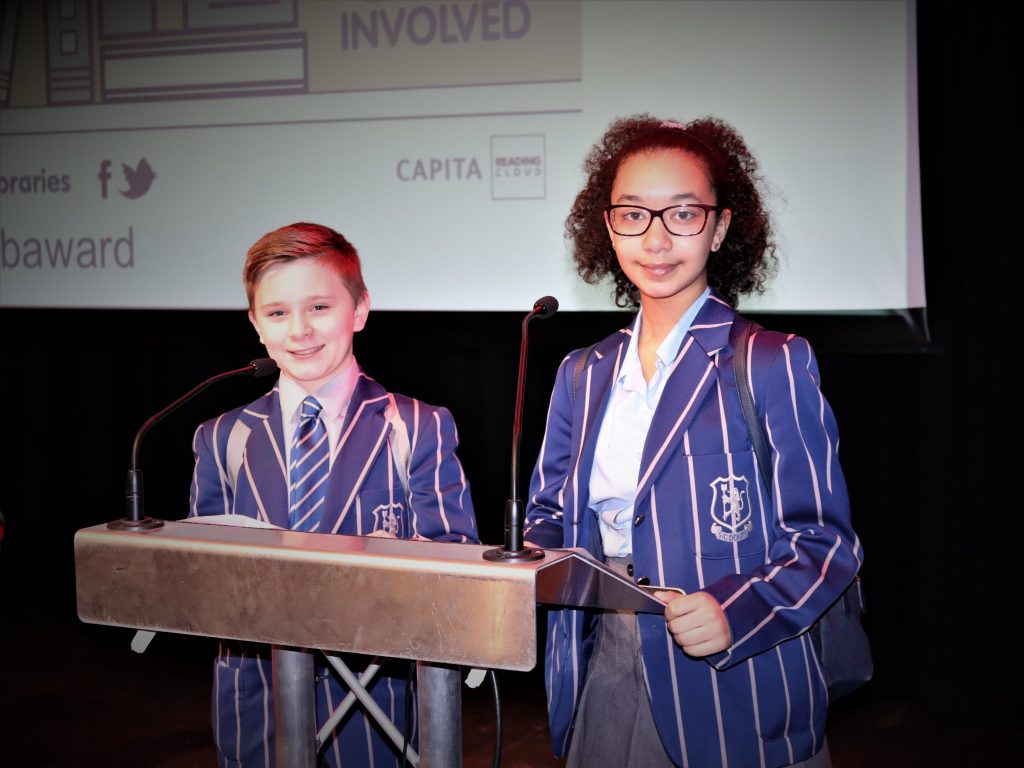 On Friday 15th March, Bridgewater Book Club students had the honour of attending the sixteenth Salford Children’s Book Award Ceremony at the University of Salford. Here they discovered which author had won the 2019 award and the opportunity to meet all the authors of this year’s shortlisted titles:

Two of our Year 7 pupils, Dalia and Jake, took to the stage to speak about the book The 1,000 Year Old Boy by winning author, Ross Welford.

In our Book Club we enjoyed reading all of the books but The 1,000 Year Old Boy was our favourite. Ross Welford makes the reader connect to the characters in the book. Once you start reading you cannot escape the character’s world and you genuinely think you are there, until you finish the book.

Alfie Monk seems like any normal eleven year old boy, other than he has a different fashion sense than normal nearly-teenage boys and teeth which are badly in need of a dentist. But there is more to him than meets the eye. He is 1,000 years old and has been alive since the last Viking invasion. Alfie possesses magic from a precious life pearl which makes him a Neverdead. Alfie, however, wishes he was not over 1,000 years old. He hates having the body of a child and he just wants to grow old and die. He is desperate to have a normal life, have friends and grow old.

Alfie and his mother, Hilda Monk, as well as his cat Biffa, had been living peacefully for centuries until tragedy strikes. A fire destroys everything Alfie loves including his mother and his house. He then meets two people Aidan (a present day boy) and Roxy Minto (a feisty, no nonsense character whom I loved). He meets them whilst hiding in Roxy’s den in the woods, near where he used to live. Roxy is a great character whose gift for lying well gets them all out of some difficult situations!

The three of them become close friends and Alfie trusts Aidan and Roxy with his secret, something he has never ever done before. Roxy allows Alfie to live in her hideout. Unfortunately, Aidan’s little sister, who has been playing in the woods, discovers Alfie. She tells everyone she has found the missing boy whom everyone had been looking for after the fire.

Alfie is sent to a children’s home. He feels betrayed as he thinks that Aidan and Roxy have deceived him.

There are so many twists and turns in the plot. I don’t want to give any more away if you haven’t read it but it is an amazing story which I couldn’t put down.

This book is impossible to put down. It is gripping, tense and very moving. I have read Ross Welford’s other books and loved them. This one is no exception. It has a thrilling storyline and has mysterious and adventurous characters who kept me engrossed throughout the whole story. Personally, this book really started to hook me when Aiden moves house (chapter 4) as this is the time when all the characters start to come together. I liked their friendship, as they all have problems fitting in with those around them for different reasons, but their attachment to each other is really convincing, funny and moving.

Throughout the latter part of the book the suspense starts to rise as Alfie begins to put the puzzle together about Aiden’s weird uncle Jasper and how they both have the same scars. This is when I became too scared to pick the book up as the story became quite dark. However once I plucked up the courage to read on, I couldn’t put the book down. This book kept me awake till midnight! That is how gripping it is!

This book is brilliant. It is hilarious and at times quite scary. As I said before, I have loved all of Ross Welford’s books and eagerly look forward to reading his new novel ‘The Dog Who Saved The World’.

As a student, you are the most amazing discovery you will ever make.